Warning: Parameter 1 to wp_default_scripts() expected to be a reference, value given in /home/tracknat/public_html/wp-includes/plugin.php on line 601

Warning: Parameter 1 to wp_default_styles() expected to be a reference, value given in /home/tracknat/public_html/wp-includes/plugin.php on line 601

In his high hurdling heyday, Roger Kingdom was the “baddest man on the planet.” The Georgia native was drawn to the University of Pittsburgh on a football scholarship, but found more success on the Panther track team, earning two NCAA hurdle titles. According to the bio on his website, www.rogerkingdom.com, it was “after winning his first title (110-meter highs in the 1983 outdoor championship) that he knew his future would be with the high hurdles.” Kingdom redshirted from football after his sophomore year in 1983 to concentrate on making the Olympic team. After winning the gold medal in the 110-meter hurdles at the 1984 Los Angeles Games, it was obvious that his choice to commit fully to track was the correct one.

Kingdom followed his gold medal performance of 1984 with another Olympic championship four years later in Seoul. In the process, he became the first Olympian to eclipse the 13-second mark, with a 12.98. Three years later, he set the World Record in his event, running 12.92 at a meet in Zurich, a record that would stand for four years. Kingdom also won five U.S. National Championships, as well as gold medals in the World Cup (1989), World University Games (1989), Pan-American Games (1983 and 1995), and World Indoor Championships (1989).

Kingdom graduated from the University of Pittsburgh and earned a master’s degree in Sport Management from California University of Pennsylvania, a Division II school at which he also served as the head cross-country and track coach during his 10 years there. Since finishing his hurdling career, the 51-year-old founded Kingdom’s Elite, a company dedicated to the development of speed training for all ages and athletic levels.

In March 2014, Kingdom’s love of football and speed training came full circle as he was hired as the assistant strength and conditioning coach of the NFL’s Arizona Cardinals.

TS: You played football at the University of Pittsburgh, but transitioned to hurdling after winning an NCAA championship. First, how did this transition take place, and second, did you ever catch any passes from Dan Marino?

Kingdom: I played freshman and sophomore years at Pitt. I played wide receiver during my freshman year and caught a few balls from Danny. In fact, I have some jacked up fingers to prove that! Sophomore year, I moved over to free safety. (Note: Aside from NFL Hall-of-Fame QB Marino, other Pitt teammates included another Hall-of-Famer, Chris Doleman, as well as Bill Fralic and Jimbo Covert.) But after sophomore year, I redshirted, and after winning the gold medal in ’84, that was it for football.

TS: How much did you keep up with football over the next 30 years or so?

Kingdom: I never fully left football. Buddy Morris was our strength and conditioning coach at Pitt, and he would ask me to come and talk to the guys when he went to other teams. Then, when he got hired by the Cleveland Browns, I went there and worked as an intern and got to learn about the game at that level. I also worked with a player here and there to help them with their speed. A couple that you probably heard of were Brian Robiskie (Atlanta Falcons wide receiver) and Antonio Bryant (372 catches in eight NFL seasons).

TS: And Morris went on to become the strength and conditioning coach of the Arizona Cardinals. What was the process of bringing you on board?

Kingdom: It was Morris and Coach (Bruce) Arians. Actually, Arians knew about me and asked Coach Morris. Buddy knows that I know a lot of the strength apps because I’ve gotten them from him. He knows that I have trained myself in the past. But he knows that I can take what he does in the weight room and apply it on the track.

Q: Will you be working with anybody specific with the Cardinals?

Kingdom: I’ll be working with the skill players.

Q: The Cardinals have recently improved into a playoff caliber team. What’s your feeling about being hired by this particular organization?

Kingdom: I love track and field—it always came natural to me. It was good for me not to close that door, and I’m fortunate for this opportunity. The Cardinals have accepted me and welcomed me with open arms. I’m very impressed with their management and ownership. [Team President] Michael Bidwell sat down with me and impressed me with his vision of where the team is going. Sometimes when you work with a group of people, you have to convince them to work hard and become successful. But here, the players are hard-working and they want to win! They buy into a winning vision.

For more on this topic visit our Track Nation Magazine page :http://tracknation.com/trackside5 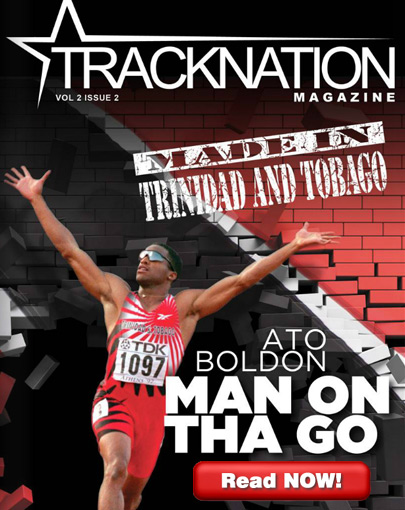